A Day in the Life of Jonathan Hunter-The Consultant

For those of you who have heard of Jonathan Hunter, The Consultant, I thought you might like to read some of his diary entries that helped me write his first Jonathan Hunter Thriller. Here they are: 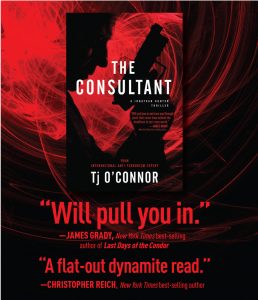 Dear Diary . . . Day 1: It’s me, Jonathan Hunter, CIA consultant and world traveler extraordinaire. I arrived home in Virginia today from Afghanistan. It was a long trip and three times I had to change names so my crotchety old boss, Oscar LaRue, wouldn’t find me yet. I haven’t been home in years—a couple decades almost. I haven’t spoken to Kevin, my brother, in all that time. Can’t wait to see him. Rent my car, drive to Winchester, and life will be good.

Dear Diary . . . Life isn’t good. I found Kevin tonight at our old fishing spot along the Shenandoah River. Some bastards murdered him. Worse, those bastards aren’t just murderers, they’re terrorists. What the devil is Kevin doing mixed up in terror? That’s my thing. His thing is being a cop. His last words threw me. They mean something and I have to find out what … Khalifah . . . Not them . . . Maya. No matter. Those SOBs made a huge mistake. No, they didn’t leave any evidence—they blew it up right in front of me. Their mistake was much worse than that . . . they didn’t kill me, too.

Dear Diary . . . On a lighter note, I met some fun and interesting people. First, there’s Detective David Bond. He knew Kevin well. He thinks I killed Kevin and he hates me. Fun times ahead. Then, there’s Special Agent “Wow” Victoria Bacarro. She’s just my type—she’s dark-haired, beautiful, smart, sassy, and she carries a big gun. Wow, maybe I’m in love. Oh, wait . . . Kevin was married? He has a teenage kid? Noor Mallory—another “wow” . . . dark and beautiful, sassy and intelligent . . . Oh boy, am I in trouble now.

Dear Diary . . . It’s started. Kevin’s murder was just the first step. Now, there are attacks coming. I barely made it out of one this morning and I know there are others on the way. I can’t hide from Oscar any longer. Time to get to work. P.S., Diary, the rental car manager didn’t understand all the bullet holes in my car. WTH? I bought the extra insurance!

Dear Diary . . . Detective Bond came to take me to breakfast this morning. Well, not really. He took me to jail. It’s all a misunderstanding, of course. I use aliases from time to time, and sure, I don’t have any proof who I am. None I can share. I gave up my real identity years ago. Oh, and yeah, I have an illegal gun and … I’m sure he’ll understand. Eventually.

Dear Diary … Glad that’s over. Met an old pal while being interrogated by Detective Bond. Artie Polo, from an operation in Saudi Arabia. Remember that one? We were both nearly killed—honest, it wasn’t my fault. Anyway, Artie’s with the FBI now and he’s going to help me out. That is, if I can convince him I didn’t kill Kevin. I gotta look up “obstruction of justice.” He keeps throwing that phrase around at me. That Artie, what a character.

Dear Diary . . . Losing Kevin for the second time is killing me. I came home to mend fences. He was angry with me for fifteen years after I ran off to join the Green Berets and later the CIA. He said I’d end up dead in a ditch somewhere over there. You were wrong, Kevin. You stayed home here, nice and safe, and ended up dead in a ditch over here. What have you done, brother? What did you get into so deeply that you swallowed your pride and called me home? I’ll figure it out, Kev. I promise. No matter what. No matter who. I got this.

Dear Diary . . . More attacks. I’m onto something, though. Everything seems to be swirling around Winchester—this small, Virginia town that is coming to grips with Muslim refugees, terror, and yeah, well . . . me. Kevin is haunting me.
There’s more going on here, too. Some international assassin, Caine, is stalking me. Then there’s this Khalifah—he’s a master terrorist the CIA and FBI have been hunting for years. What are they doing in sleepy Winchester, Virginia? Are they here for a war? Or for me?

Dear Diary . . . The Russians and the Iranians are up to their balaclavas in this mess, I swear it. There are others, too. Too many. I’m going to get dirty on this one. I know it.

Dear Diary . . . Oscar found me. Boy is he pissed. I guess me leaving Afghanistan without permission is a problem. I can’t believe I’m saying this, but good thing there’s all this chaos going on around me—unusual as it is, right? I mean, he’s more worried about me finding some rogue Middle Eastern assassin than firing me for being AWOL. At least for now. I sure hope this doesn’t get me shot.

Dear Diary . . . It’s ugly—very ugly. There’s a big attack planned and it’s all coming together. My dead brother. Iran and Russian. Terror. Fear … prejudice. We’re headed back to war. I have to stop it!

And there you have it. A few of Jonathan’s posts that made The Consultant a fast-paced ride from the moment he returned home to Winchester. Check out the entire story. I dare you.

Note: The above blog post was originally written for, and posted to Brooke Blogs, a great site for authors and readers. Check it out at: http://www.brookeblogs.com/the-consultant-by-tj-oconnor-a-day-in-the-life-of-jonathan-hunter/