The Real Sins in New Sins for Old Scores

Murder, like history, often repeats itself. And that, my friends, is the premise for my new murder mystery, New Sins for Old Scores from Black Opal Books.

My fourth mystery follows similar footsteps of my last series—a murder mystery with a paranormal twist that includes a historical subplot and a main character that is, well, living-challenged. Dead. Okay, yes, one of my main characters is dead.
Let me explain. Here’s the story’s summary:
Murder, like history, often repeats itself. And when it does, it’s the worst kind of murder.
Detective Richard Jax was never good at history. Now, after years as a cop, he was about to get the lesson of his life.
As Jax lay dying after being ambushed at an old inn on a stakeout, he’s saved by Captain Patrick “Trick” McCall—the ghost of a World War II OSS agent. Trick has been waiting since 1944 for a chance to solve his own murder and prove he wasn’t a traitor. Soon, Jax is a suspect in a string of murders. The murders are linked to smuggling refugees out of the Middle East—a plot similar to the World War II “Operation Paperclip,” an OSS operation that brought scientists out of war-torn Europe. With the aid of a beautiful and brilliant historian, Dr. Alex Vouros, Jax and Trick unravel a seventy year-old plot that began with Trick’s murder in 1944. Could the World War II mastermind, code named Harriet, be alive and up to old games? Is history repeating itself?
Together, they hunt for the link between their pasts, confronted by some of Washington’s elite and one provocative, alluring French Underground agent, Abrielle Chanoux. Somewhere in Trick’s memories is a traitor. That traitor killed him. That traitor is killing again.
Who framed Jax and who wants Trick’s secret to remain secret? The answer may be, who doesn’t?
There were several elements behind the plot of New Sins for Old Scores that combines fact-based history—perhaps with a few liberties here and there—with my imagination. First, Operation Paperclip was a real operation during World War II. The US, using the OSS—the forerunner of the Central Intelligence Agency—sneaked scientists and industrialists out of war-torn Germany and into the US to further the US’s advancements in the face of the growing Cold War with Russian. The Russians were doing it too. In truth, Operation Paperclip brought German rocket scientist Wernher Von Braun to the US. Von Braun had been the German pioneer behind Hitler’s famed rocket program—including the V2 rockets that threatened to devastate England and win the war for Germany. He had also been a Nazi. Through Operation Paperclip, Von Braun ultimately became the US’s leading scientist in our space program. To accomplish many of these relocations, the US “erased” or otherwise ignored the checkered past of these scientists and industrialists. Most were Nazi Party members that had participated or at least overlooked slave labor and other war crimes while they continued to support Germany’s war efforts. But their knowledge and skills were paramount to supporting the US in the growing Cold War against the Soviets—who had, of course, grabbed their own scientists and industrialist with the goal of burying the US entirely. German war spoils, including its people, were scooped up with the knowledge that another war would come between the allies that defeated Germany.
Now, I’m a history buff and the OSS and Operation Paperclip fascinate me. I was also an anti-terrorism agent with the US military during the first Persian Gulf War and understood both the complexities and shortfalls of war and its aftermath. So I began to wonder—in the Persian Gulf Wars, the US used countless contractors to support the war efforts. Those included companies with intricate ties to our intelligence community and Special Forces. The question I raised was—What if one of these contractors ran its own Operation Paperclip in the Middle East? What if they did it without the government’s knowledge and they did it for profit? Surely there were thousands—more—Iraqis, Afghanis, and others who would pay serious money to get out of the region and into the US—legally or illegally. What if this corrupt contractor took advantage and ran a human smuggling scheme similar to Operation Paperclip? And what if that modern day human trafficking caper wasn’t the first? What if back in WWII, some enterprising operatives ran their own trafficking ring to smuggle people out of Europe who the OSS might not have been interested in.
Viola, the basis for New Sins for Old Scores. Add a local Virginia detective who stumbled onto the caper, a couple murders, a heroic Arab girl, and a dead OSS operative and you’ve got a story.
This plot proves that history repeated itself quite nicely. In my story, Trick McCall discovered an illegal operation in 1944 to smuggle wealthy German’s out of Europe to the States for profit. He was killed for it. In 2011, Jax stumbles on another human trafficking ring and he was nearly killed for it. Together, they must find those responsible and prove that Captain Trick McCall was not a double agent for the Nazi’s and that Jax is not a cold-blooded killer.
So for New Sins for Old Scores, the story is based on facts—perhaps tainted with real sins too—with the US’s bringing Nazi scientists to the US and turning a blind eye to their misdeeds and complicity in war crimes. Along the way, good men and women died for those sins. New Sins for Old Scores shows that while time may go by and war becomes more and more sophisticated, evil keeps pace, and ultimately, it’s the basic failures of men who commit the worst sins. For Richard Jax and Capt. Trick McCall, those old scores surface again but with new sins. And if not for the repeating history, they would never learn the truth.
For more on New Sins for Old Scores or my other paranormal mysteries, check out my world at www.tjoconnor.com 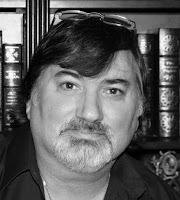 Bio
Tj O’CONNOR IS THE GOLD MEDAL WINNER OF THE 2015 INDEPENDENT PUBLISHERS BOOK AWARDS (IPPY) FOR MYSTERIES. He is the author of New Sins for Old Scores, Dying to Know, Dying for the Past, and Dying to Tell. His new thriller, The Consultant: Double Effect will be out in the spring of 2018 from Oceanview Publishing. Tj is an international security consultant specializing in anti-terrorism, investigations, and threat analysis—life experiences that drive his novels. With his former life as a government agent and years as a consultant, he has lived and worked around the world in places like Greece, Turkey, Italy, Germany, the United Kingdom, and throughout the Americas—among others. He was raised in New York’s Hudson Valley and lives with his wife and Lab companions in Virginia where they raised five children.
Learn about Tj’s world at:
Web Site:  www.tjoconnor.com