The Consultant: Spring Is Coming …

Terror … Fear … Prejudice. America’s heading back to war. Someone has to stop it.
The Consultant—Coming in May 2018 from Oceanview Publishing. So, beware … Spring is Coming. 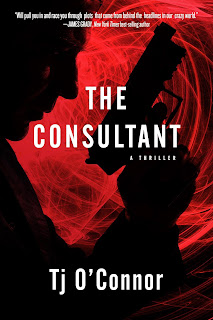 Getting ready for my debut thriller to release, I realize that some things never change. Do they? I’ve been in the anti-terrorism business since I was in my early twenties. That’s … thirty-five years ago? Gulp. Yep, a long damn time. In my early days, terror, fear, and the prejudice they brought was part of the cases I ran. I was a rookie military federal agent running criminal, counterintelligence, and anti-terrorism operations and dealing with the ugly side of life was part of it. Today, some three and a half decades later that ugly side of life is still a part of the job. The same things that spawned chaos then still do now.
But since I was a rookie agent, there’s only one thing that’s truly changed in all my years doing this work. Me. I’m older, grayer, and er, more robust (read that as fatter). Although I have to say, I’ve really not changed that much. I’m still an adventurer and still earn a living in this crazy security and anti-terrorism stuff. The important thing that has changed for me is that in addition to working in this crazy profession, I write novels about it. Oh, not the super-secret stuff or anything that requires my secret decoder ring. No, I value being on the outside of prisons and fully employed. I write about life as a consultant—my chosen profession—but from a totally fictional point of view—Jonathan Hunter, World Traveler Extraordinaire.

Jonathan Hunter is The Consultant. Here’s just a taste of his first adventure.

The gunshots took me by surprise and, without luck, might have killed me …
Jonathan Hunter, a rogue CIA consultant missing from his Middle Eastassignment, returns home to witness his brother’s horrific murder. For fifteen years, Hunter and Kevin Mallory were silent—until Kevin uttered his final words … Khalifah …not them … Maya … Launched into the hunt for Kevin’s killer, Hunter stumbles into a series of horrifying terrorist attacks—all at the hands of Middle Eastern refugees that sparks a backlash across the country and threatens another war. In the shadows, Hunter’s mentor—the omnipotent Oscar LaRue—is playing a dangerous game with Russian Intelligence. All the while, neither Hunter nor LaRue understand that a new threat—the Iranian threat—has entered the game. As stakes begin to rise, two shadowy players are one-step ahead of Hunter—Khalifah, a dangerous terrorist mastermind, and Caine, a nomadic assassin who only dances with the highest bidder. As the attacks escalate and the country drifts toward another Middle East war, innocent refugees become the victims caught between the terrorists and the terrorized. Prejudice, hate, and fear vent everywhere—is this who we’ve become? Before the country explodes, Hunter must find Khalifah, learn the target of the next terrorist attack, and pray he’s in time.
Now, for those who think Hunter is really me—I wish—I’d be lying if I didn’t say there were similarities with my life’s adventures. But just similarities. For instance, Hunter is a sarcastic, free-wheeling, and outspoken adventurer. My friends would call me similar things—smartass, rogue, and outspoken adventurer. Close enough. Hunter is also a consultant after leaving his first love, the CIA. I am and have been a consultant after leaving my first love, OSI. Not quite on the same plane but similar. Hunter’s life revolves around counter-terrorism. Mine revolves around anti-terrorism. He’s a former Green Beret, CIA operative, fortyish, suave, love-lost, and a rogue. And yep, that’s where the similarities end. Abruptly. I’m none of those things, well, except maybe a rogue at heart.
Hey, but I’m a Harley biker… Hunter isn’t! (Yet.)
While Hunter and I are distant cousins, the character is definitely not me full time. I’d say his view of life, his dialog are about 75% me. But who he was and is and what he does enters my world of fantasy and fiction. If it didn’t, I’d already be in jail. No, I was never a Green Beret and never worked for the CIA. I was an Air Force cop and a Special Agent with its OSI. Close but no cigar. Since OSI, I’ve been a consultant and have continued my life in the security and anti-terrorism world. I have had a life  full of adventures that I am immensely both proud of and thankful for. I have met and worked with the most extraordinary people…some of the most consummate professionals who made me who I am – both good and bad. I have had the distinct pleasure and luck to have done things in places that most people only read about in books—with and for those extraordinary people. Today, those people are in my stories, hiding not so deep in my characters. They are not me, but they are who made me. Perhaps my life’s adventures aren’t as robust and daring as others – like the many pros I work with – but it’s been a hell of a ride so far.
So for the world surrounding Jonathan Hunter, I have had many role models. For the past twenty-something years, my mentor, Wally K., was the man behind Oscar LaRue, Hunter’s CIA master. Wally K was one of the last OSS Operatives from World War II and the former Deputy Director of CIA. He was my boss, friend, mentor, and best critic. I lost Wally two years ago to age and a bad heart. But he lives on now in The Consultant.  There’s also a dozen former US Special Operators—Green Berets and Navy Seals—whom I have the pleasure of working with almost daily today. They are the bits and pieces that make up Hunter himself—the parts I cannot provide from my modest background. There’s one in particular, Mike P, who has been my constant advisor on all things Green Beret to make Hunter’s legend accurate and endearing. And of course, I’d be remiss in not mentioning the handful of former FBI, CIA, XXX, and others who make up the supporting characters Hunter encounters through the pages.
Oh, yeah, and the bad guys—my favorites! They’re the best. I get to take all the worst pieces-parts of the slugs and terrorists I’ve chased over the years and glue them all together to morph into Khalifah, Saeed Mansouri, Caine, and Colonel General Alexei Mikhailovich Fedorov—Hunter’s nemeses. I love these guys. Deep down, they’re really just misunderstood softies with a heart … not. They’re smart and cunning and evil and deadly. They are those bastards you read about in the news and see on the video feeds hating and killing and asking to be hunted. They are the adversaries of my youth and the evil that we face every day.  They are pure and simple, bad guys.
And therein lies Jonathan Hunter—The Consultant. Terror … Fear … Prejudice. America’s heading back to war. Someone has to stop it.
So until Hunter hits the shelves in May, I’ll be blogging the backstory of my journey down memory lane developing the story, characters, subplots, and the thrill of landing The Consultant with Oceanview Publishing.
Until May, remember … Spring is coming. Tj O’CONNOR IS THE GOLD MEDAL WINNER OF THE 2015 INDEPENDENT PUBLISHERS BOOK AWARDS (IPPY) FOR MYSTERIES. Tj’s debut thriller, The Consultant, is coming in May 2018 from Oceanview Publishing.
Tj is also the author of four mysteries with a paranormal twist—New Sins for Old Scores, Dying to Know, Dying for the Past, and Dying to Tell.
Tj is an international security consultant specializing in anti-terrorism, investigations, and threat analysis—life experiences that drive his novels. With his former life as a government agent and years as a consultant, he has lived and worked around the world in places like Greece, Turkey, Italy, Germany, the United Kingdom, and throughout the Americas—among others. He was raised in New York’s Hudson Valley and lives with his wife and Labrador companions in Virginia where they raised five children.
Learn about Tj’s world at:
Web Site:  www.tjoconnor.com