by Tj O’Connor
Cancer should be spelled with an F. That’s the way I spell it—F—ing Cancer.

I have faced death all my life. We all have in one form or another. But these past couple years has been one heartache after another. Still, nothing prepared me for the loss of my girl, Maggie Mae. Nothing. In 2015, I lost both my mentor, Wally, and my companion, Mosby. One as much as the other—a Lab and a brilliant but crusty old spy—devastated me nearly the same. I’m not embarrassed to admit it. Wally was 92 and had lived his amazing life. Up until the very end—the hour—we shared laughs and talked and made sure there was peace and understanding between us. But with Mosby, it was hard to share anything but the loss. I wanted him to understand there was no choice. To understand that there was no greater love than to let go and save him from pain and despair. No greater sacrifice than accepting responsibility for the strange, heart-breaking kindness that is sometimes death. I hoped—prayed—he understand that I was not betraying him. Not merely moving on. I was saving him from the worst fate.
I try to tell myself that every day. Sometimes it works. Sometimes it kills me all over again. Pain doesn’t go away, it just simmers in the background waiting for an opportunity to burn you a little more.
Maggie is different. Painfully different. I can’t explain why—perhaps because she was my girl or perhaps it was because it was such a shock. Perhaps it was something else—she was forever in bandages for something. Always on meds for this or that. A twelve year struggle to cure the next thing. But she lived without complaint. Without demand. Always happy and loving. Until December when she came up lame in one leg. The vet told me she had arthritis, maybe a damaged ligament. No worries. Pain meds, therapy… maybe a little surgery if it didn’t heal quickly. All would be fine.
Wrong. Dead wrong.
Three weeks later, I knew something was very, very wrong and sought out a specialist. My girl wasn’t going to limp anymore or down pain pills any longer. Whatever the reason. Whatever the cost. She was going to be healed—and fast.

Oh dear God … twenty minutes after arriving, the end lay in my lap, panting and begging me for a chance—a few more weeks. A few more months …  Osteosarcoma. F—ing cancer. Deep in her bone. So deep it was killing me, too.
The doc, an amazingly lady with class, skill, and compassion, operated that day and took her leg to save her life. Chemo was scheduled. More pain meds. But hope was in my grasp. Within three days she was hobbling around, playing a little, loving a lot—the smile back in her eyes after two months in hiding. Even after her first chemo treatment, she was on her feet and fighting back. Fighting for us. Fighting for life. She loved on Toby, or black Lab and the love of her life. She played with my granddaughter, walked and slept with me, and ate everything she could find. After all, dying be damned—she was a Lab.
Until the second week. Paralysis consumed her. It was back. She couldn’t walk, couldn’t sit, couldn’t have the dignity of controlling herself … her face exuded embarrassment when I carried her for days into the yard just to keep her from soiling herself. I didn’t know what was killing her faster—f—ing cancer or shame.
Humans should have such dignity.
I can barely write these words. The next ones especially. Pain rains and fingers tremble—the thoughts of those last moments. For those who don’t share my emotions over pets, you shouldn’t have them. For those that do, I can only image you’re sharing a little of my grief right now. You know the rest of the story. I couldn’t allow her any more pain, anymore shame, anymore cancer. And in my arms, both of us shaking … I let her go. 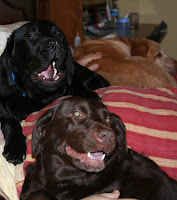 Damn me for what I had to do. Damn me. I only pray that if there is a heaven—and for souls like hers and my boy, Mosby, there has to be—that she and he are together and happy. They deserve it like no human I’ve ever known. Loyal. Loving. Compassionate.
This is not the fun, lighthearted post I wanted to write. But it is the post I had to write. It hasn’t healed me yet—I am struggling still. But it helps. Because sadly, I’m not always the adventurous, tough Harley guy people think of me too often—I’m an UFO (ugly fat old guy) who cries over lost dogs and isn’t ashamed to post that pain for the world to read.

But, the loss of one has one good fortune with the pain—room for another. Toby needs a companion—he morns for Mags every day. This house needs a girl—I do to. Not to replace you, Mags, but because you left such an emptiness behind.
So, to end this with a little hope … welcome Annie Rose. You’ve got big paws and a huge heart to fill. Be gentle with Toby and me—we’re still grieving. But he, like me, is coming around.
We’ll talk again next month.

Tj O’CONNOR IS THE GOLD MEDAL WINNER OF THE 2015 INDEPENDENT PUBLISHERS BOOK AWARDS (IPPY) FOR MYSTERIES. He is the author of New Sins for Old Scores, coming in Spring 2017 from Black Opal Books, and Dying to Know, Dying for the Past, and Dying to Tell. He recently finished his new thriller and is beginning three sequels to previous works. Tj is an international security consultant specializing in anti-terrorism, investigations, and threat analysis—life experiences that drive his novels. With his former life as a government agent and years as a consultant, he has lived and worked around the world in places like Greece, Turkey, Italy, Germany, the United Kingdom, and throughout the Americas—among others. He was raised in New York’s Hudson Valley and lives with his wife and Lab companions in Virginia where they raised five children. Dying to Know is also the 2015 Bronze Medal winner of the Reader’s Favorite Book Review Awards, a finalist for the Silver Falchion Best Books of 2014, and a finalist for the Foreword Review’s 2014 INDIEFAB Book of the Year Award.
Learn about Tj’s world at: