Yes, it’s true. In just 101 days, my time is up—my Dying will arrive. Aren’t you Dying to Knowwhy?
On January 8, 2014, my first novel of the series, Dying to Know, arrives on the bookshelves. Dying for the Past will be out later that year sometime (to be determined).

Okay, that’s just too corny for even me. But what the heck, I gave it a shot.

This past month has been a wild ride. Earlier, I reconnected with an old colleague of mine, Stephen Frey—as in New York Times Best Selling author, Stephen Frey,  http://www.stephenwfrey.com – author of eighteen thrillers.  Steve was a principal at my former employer where I was COO. That was a ride worth loving and hating all at the same time. Steve and I reconnected a couple weeks ago and he was kind enough to give me some advice and a blurb for my upcoming book. I hope that one day I can repay the favor, if not to him, perhaps to some other up and coming author. At least I’ll be buying him some lunch and good wine next month.

Next, I finished up the last of my edits for Dying to Know (due out on January 8 and can be pre-ordered at Amazon, Barnes & Noble, and Midnight Ink websites… hint, hint). It was thrilling and scary at the same time. Thrilling to be getting ready to go to the presses. Scary that I worry about my debut novel falling flat. So here’s the deal. I did the math. If every one of you buys 100 copies, I’m damn near sure it might be a best seller. What do you think, huh?
Okay, maybe not.

I also recently completed the first of two sequels Midnight Ink bought. This one, Dying for the Past, is the second installment of Oliver “Tuck” Tucker coming to terms with his new profession—a dead detective. Tuck finds himself being stalked by 1930’s gangsters while he hunts the killer of a mysterious philanthropist. He also must confront his family’s past—one he never knew existed—and all the while trying to prove that his wife, Angel, was not raised by yet another killer. Dying for the Past continues the series’ exploration of how Tuck and Angel—assisted by Bear Braddock, his living police partner, and Hercule, his dedicated albeit lazy black Lab—come to terms with Tuck’s dilemma on how to be back amongst the living but not one of them. (For those of you just tuning in, Tuck is, err, dead. Yet his character runs the story!) Get the book. Read it. You’ll get it.

Each of the Dying to Know books will unravel bits of Tuck’s family heritage—all the way from the roaring 20s to the modern day. Each story will have a historical subplot based in fact. Or facts as I choose to portray them. See, writers don’t lie. They just plot-twist.

My agent, the incomparable Kimberley Cameron, already accepted Dying for the Past with minor edits. It’ll be off to Midnight Ink post haste. Now it’s time to begin the second sequel, Dying to Tell—are you starting to see the theme here?

My next adventure this past month was attending the Bouchercon Mystery Writers conference in Albany, NY. For those of you who don’t know, I grew up some thirty miles south of Albany. So it was good to be back for a visit. 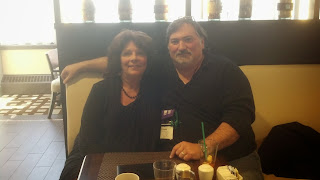 Bouchercon was a fun conference, albeit difficult to mingle. My fellow writers were scattered around Albany in different hotels, the conference center was an up-hill mountain climb without benefit of Sherpa guides, and much of the local city bars and restaurants closed in the evening. But never believe that you can take good food and wine from writers. No. Cannot be. We found a way—though in small clusters. The highlights of my trip were having lunch with a dear, sweet pal from my past—Christine—who has been a close pal for twenty years. She and I had lunch and told lies about ourselves (well I did, she was rather honest I think). She’s a great lady and all you NY bums better pay attention!
Next was the super-highlight of my trip. I was privileged to spend a few moments chatting with the queen of mystery writing—Sue Grafton. Sue gave a wonderful interview on stage at the conference followed by a reception. She received a Lifetime Achievement Award (although they’ll owe her another at the rate she knocks out best sellers!) When we met, she was gracious and interested in my work, charming, and, above all, one of the classiest ladies I’ve ever met. All authors—unknown and famous—should strive for her talent and charm. I will. 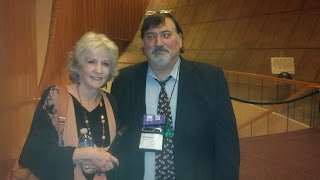 Alas, this is the end of my update. Beginning next month, I will begin a routine blog entry on Dying To Know and its series. I’ll also be guest blogging at the Midnight Ink blog spot, http://midnightwriters.blogspot.com.
So look for me here and at www.midnightwriters.blogspot. So anytime you find someone who needs killing (in a book, honest NSA), flash a giant “Tj” in the night sky. If I see it, maybe I’ll call. Eh, maybe not.